Know all about the Rift Tour in Fortnite here. More on RIft Tour Quests below! Also get to know about all the details and about the countdown we saw recently in Fortnite.

What is Rift Tour in Fortnite?: Once again Fortnite amazes us with its creative new event. And this time it’s something completely different than anything before. We’ll know about the details of the event and what it can bring us. Keep reading to know all of the details about the Rift Tour event, quests, and its rewards right here.

What is the Rift Tour in Fortnite?: A Musical Journey to Musical Realities!

Although, Epic has not revealed yet who the star of the event might be. Even so, we think that Ariana Grande is going to be starring in this Rift Tour. However, it can be more than just one character that features in the tour.

The Rift Tour will be officially starting from 06/08/2021. However, players will still be able to participate in various Rift Tour Quests that will take place throughout this week. Apparently, you’ll be able to do these quests from 29/07/2021 through 8/08/2021.

You will also have heard about the new Ariana Grande Skin that was a famous leak from Fortnite leakers.

Furthermore, you’ll also get rewards for completing the Rift Tour Fortnite Quests! The First Wave of the quests will feature the rewards we will discuss below. 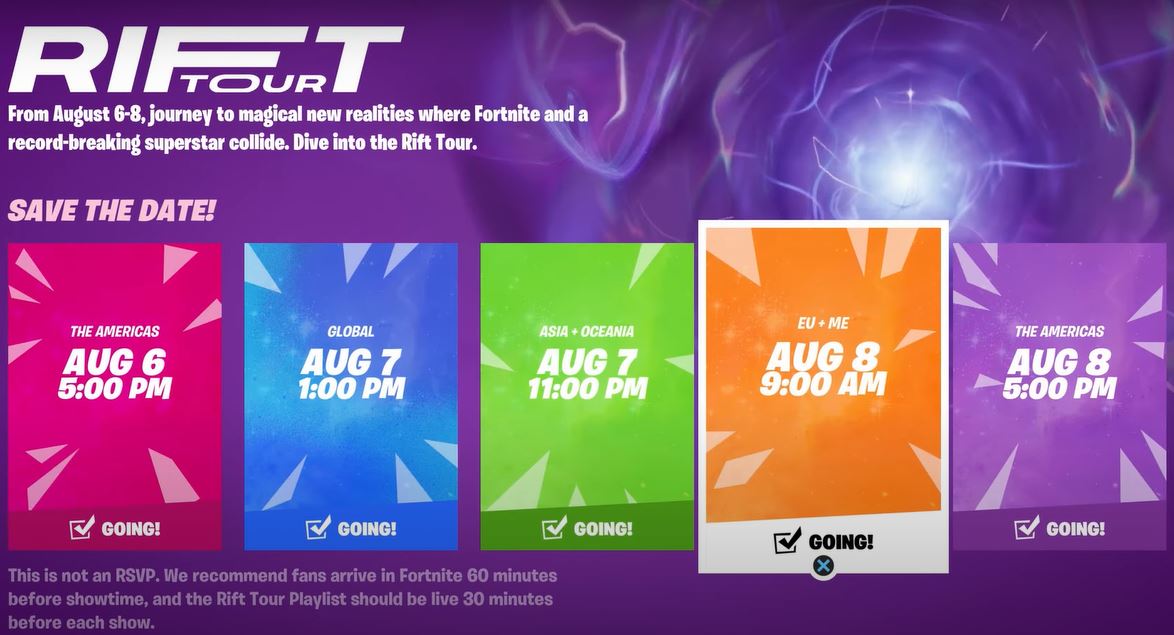 You’ll be able to access the in-game tab as shown above. There will be 5 concerts taking place over two days. And before that, you’ll be able to enjoy some cool new rewards from completing the quests of Fortnite.

Since Fortnite will be releasing the quests very soon you’ll be able to complete them throughout the mentioned dates. For the first wave, the rewards are:

Check out the all-new Summer Skye Skin in Fortnite!

Is this from the Fortnite Countdown That Everyone was seeing a Few Days Ago?

The answer to this question is yes. Most probably when Fortnite was featuring the countdown it was pointing towards this event. If you could spot the Fortnite Timer Countdown anywhere in the game you will know that it is highly likely that Fortnite was telling us about this event.

A few days ago ShiinaBR also posted this on her account:

A lot of new images for the Social Tab were added in this update!

This is the background of the menu! pic.twitter.com/Bpj5f1Z5Lm

As you look at the image closely you’ll realize that it is the same as the background for the Rift Tour in Fortnite that we are seeing right now. So, you can tell that Fortnite was already looking out for the concert for a while now.

However, the event has just started and it’ll be bringing a lot more quests and rewards with it. To know more about such events, the latest news, and updates in Fortnite make sure to keep following us here. Until next time!

5 of The Most Used Potions in Minecraft

How to Get Free UC in BGMI: All You Need to Know

How To Level Up Fast Battle Pass Fortnite Chapter 2 Season 8?

The Mystery: HeroBrine in Minecraft