“MoroEsports is an Indian esports startup to deliver top-notch stories, updates, and everything from the world of esports.”, that’s what Google says when you search it. However, MoroEsports’ story is much more than just a few words. It is a journey that we all are living.

At the end of 2019, Mohit, an enthusiastic guy passionate about startups and esports, booked a domain on GoDaddy.com. After trying hands-on CyberNaari (a women-oriented website) and badly failing at it, Mohit purchased www.moroesports.com with a few bucks in his account. What next? Nothing just an empty bank account and no idea what would he do with moroesports.com.

At that time, Mohit was serving Sportskeeda (one of the biggest sports startups in India). With a little knowledge of esports, he started working on the domain. As rightly said, starting something new from scratch is not everyone’s cup of tea. And, what more miserable can be when you jump into a new thing alone? Results? Nothing, a demotivated mind, and zero thrill to continue.

Passion Never Dies: When Vijay Came into the Picture

After putting his efforts into moroesports.com and getting nothing in return, Mohit shared the idea with Vijay. Who’s Vijay? Vijay and Mohit were graduation friends. Currently, Vijay is working in an MNC in Bangalore. After grinding in PUBG Mobile together for months, Mohit thought Vijay is the best guy to introduce his idea.

Vijay was interested in Esports and technical things. Mind you, Vijay was a geek back then in his college days. You would either see him jiggling in Erangel at night, or writing scripts in the computer lab. Perfect! What can be more interesting than this guy?

From Two We Grew a Team of Three: When Rohan Joined

Mohit and Vijay started working together. Basic things are done – setting up a theme, writing some code, and publishing content. This continued for weeks, then a guy came into the picture – Rohan. Who’s Rohan, btw?

Rohan was a guy who had no idea about esports, computers, and how content works. How could someone add Rohan to the startup, then? Haha! The question is obvious. However, the answer isn’t. Rohan was a hardworking guy, and, startups don’t always demand geeks. Rohan knew how to use Facebook well. He understood Instagram. And, Twitter? Well, we taught him how to tweet.

Highest Active Users on the Website: The Day We All Were Waiting For 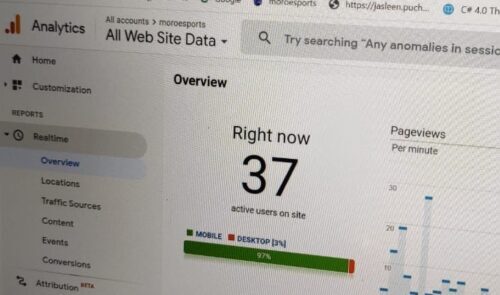 To resolve the content scarcity, Mohit planned to hire a few writers. After approaching his friends and introducing them to the idea, the hiring process started.

MoroEsports Story 2.0. What can be more surprising to young minds than watching “40 active users” on moroesports.com? This happened on September 17, around a few months after putting in sincere efforts. This is the same day when Mohit never closed his Google Analytics screen for a second. News all over! MoroEsports is trending on a keyword and has more than 2000 new users within a few hours. The moment was captured and everyone was proud of themselves.

February 2021: Collaborating with the National Institute of Technology (NIT) Hamirpur

MoroEsports Story 3.0. Fast forward a few more months, and we have collaborated with India’s prestigious institute National Institute of Technology (NIT), Hamirpur. MoroEsports is the Social Media Partner for their annual tech fest NIMBUS. Today, in the year 2021, we are earning and getting paid promotions. MoroEsports is growing with young and powerful brains.

A list of more achievements added to our startup:

Present: From Nothing to a Team of Young Brains

After the struggles and achievements, the family has grown big. A few left the team for genuine reasons. Currently, we are a team of 10+ young minds.

Other than these, the highest we achieved at MoroEsports is a team. A team of inspiring people who are passionate and dedicated to their hobby. Kudos to the people who helped us and are a part of this beautiful journey so far.

Together, we all are achieving milestones. And, we are doing what we love.

If you are interested to publish our story or feature us in your publication, feel free to contact us at contact@moroesports.com