To ease your task a little more, we have prepared a complete list on this. You can use this list to find the Cookbooks in Fortnite easily. 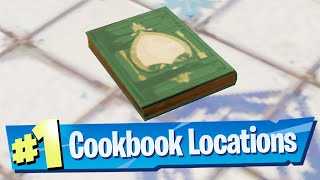 Players have a golden chance to secure themselves more XP before the end of Season 5. Fortnite Week 14 challenges have been unveiled recently. One of these challenges demands you to collect four cookbooks that too in two different locations.

Although it seems pretty easy to collect the four cookbooks, sometimes finding them on the map becomes quite confusing. But to ease your task a little more, we have prepared a complete list on this. You can use this list to identify the cookbooks locations in Fortnite easily.

Also Read: Fortnite: How to Get ‘Marigold&#8217; Female Midas Skin

Here, you can collect all four cookbooks from the same place only.

Read More: Fortnite Hideouts: What are Hideouts and Where to Locate them?

About Fortnite: Fortnite is an online video game developed by Epic Games and released in 2017. Fortnite Battle Royale, a free-to-play battle royale game in which up to 100 players fight to be the last person standing; and Fortnite Creative, in which players are given complete freedom to create worlds and battle arenas.