Free Fire is one of the most popular battle royale mobile game across the world. The Game is developed by 111 Dots Studio and published by Garena for mobile devices.  Moreover, Free Fire has got immense success due to its immersive play style and availability in low-end devices.

In 2019, the Game received the “Best Popular Voted Game” award by the Google Play Store. Free Fire was released on 30 September 2017 for beta testing. The game has set up a new record of over 80 million daily active players.

Free Fire has a lot of weapons with various plus points and weaknesses. Today we will talk about the top 3 Sniper rifles that can be used for long-range headshots. Furthermore, we will rank three sniper rifles based on their damage, range and other specifications.

Arctic Warfare Magnum gun is the best sniper rifle in Free Fire. It has the best range and accuracy with a good amount of damage. Although, there is one drawback for the Arctic Warfare Magnum that it can only be found in Airdrops. If you got lucky and found this gun, then you mustn’t wait to take a long-range fight. It comes with a pre-equipped 8x scope.

AWM has similar damage to other sniper rifles, but it comes with headshot bonus damage. The Bonus headshot damage feature will help you during fights.

M82B is a very strong sniper rifle in Free Fire, where it has a range of 85 and an accuracy of 90. It comes with extra damage dealt ability. If you fire on gloo walls or vehicles, it will give you additional damage with the basic damage dealt.

M82B also has one more skill. It can form a shield that will protect you from the enemy’s bullets. If an enemy is using Armor, you should use M82B, which will give additional body-shot damage.

Kar98K is the most popular and used sniper rifle in Free Fire. Kar98k can be found in multiple places on the maps. This is a basic sniper rifle that has a damage rate of 90. It can give a great competition against AWM in body-shot damage percentage. However, the headshot damage of Kar98k is low; that’s why it can’t execute the enemy in a single shot. 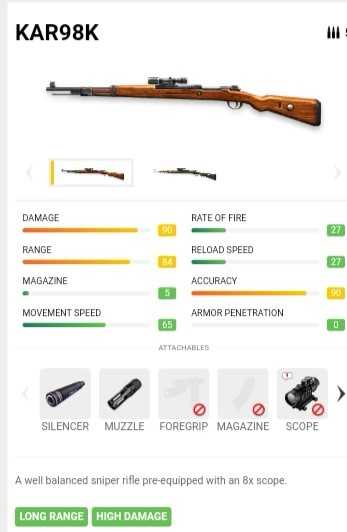 Conclusion: These are the top 3 Sniper rifles of Free Fire. It would help if you gave a try to these guns. The Choice of weapons entirely depends on the players, which they want to use for fights. It is also true that a good weapon for one person might not be suitable for another player.