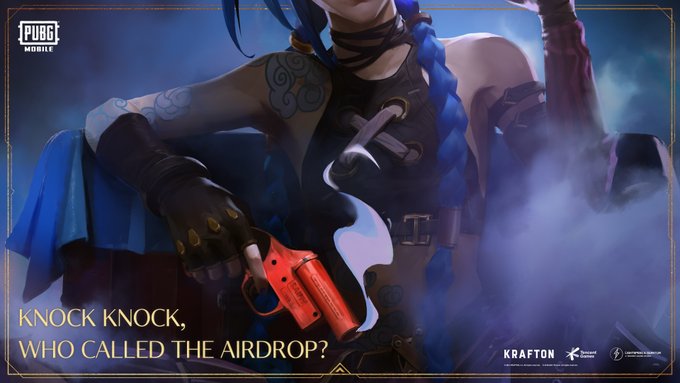 PUBG Mobile Jinx and Upcoming Collaboration with League of Legends: PUBG Mobile is one of the most popular games and their updates make them more interesting than any other game. Moreover, they frequently collaborate with different companies and brands which give a new mode to their players.

Today in this blog post you will learn about the upcoming collaboration of PUBG Mobile Jinx and what players will get from this update? This article will tell you everything you know about PUBG Mobile x League of Legends Collaboration.

It's all just fun and games until something gets blown up – then it's a PARTY! 💥

Did someone call for an airdrop of AWESOME? #PUBGM #PUBGMOBILE pic.twitter.com/xdXRQk6TJ6

Well if you do not know about the League of Legends then here is a “Quick Introduction” for you. League of Legends is one of the biggest games all around the world. And it is a MOBA (Multiplayer Online Battle Arena) category. Furthermore, it is also an extremely popular esports with millions of Prize pools. I think that is enough and let’s get back to the topic of PUBG Mobile.

Jinx is one of the characters of the League of Legends game and she is quite popular among all the players. They release a tweet by PUBG Mobile where Jinx is holding a Flare Gun. And the Caption is “Did someone call for an airdrop of AWESOME?”

There is not much information about the collaboration PUBG Mobile Jinx because they’re already running other collaborations. There are many chances that League of Legends Collaboration will be released after the end of the Halloween Event.

But, there are not no clues. And official declarations that they are going to collaborate with the League of Legends. Well, I hope you like the article and news of this post. If you have any suggestions, news, and updates share them in the comment section.

Fortfame.com Free Skins for Fortnite: Working or Not?

How to Unlock Double Fennec in COD Mobile: Step-by-Step Guide

Fortnite Redeem Codes For Free V-Bucks December 2021: How To Use...