Nine Pillars of Peace in Genshin Impact: How to Complete the World Quest?

If you want to complete the Nine Pillars of Peace World Quest in Genshin Impact, make sure to read this whole guide. You'll also get to know the rewards, and about the Stones of Remembrance in Genshin Impact.

As we are already aware of most World Quests in Genshin Impact, this is a similar one. Generally, it requires interaction with an NPC or maybe be over a specific Adventure Rank. And of course, if you’ve unlocked this World Quest by now, you can go through this guide to know how to solve the quest.

What Are the Nine Pillars of Peace in Genshin Impact?

So, this is a World Quest in the Cuijue Slope of Liyue. However, this quest doesn’t require you to interact with an NPC to start it. At Cuijue slope you’ll need to interact with a specific tablet to unlock the quest. Furthermore, there are some of the few World Quests that you can play in Co-Op. Meaning you can actually bring your friends to help you out with the quest.

After you’ve unlocked the Nine Pillars of Peace Quest in Genshin Impact, you’ll be able to see nine different statues at different locations. You’ll be able to interact with all of these pillars if you go to their glowing portions. These will generally be at the top of the pillars.

Have you used the most recent Genshin Impact 2.1 Redeem Codes yet?

Locations of the Nine Pillars at Cuijue Slope: 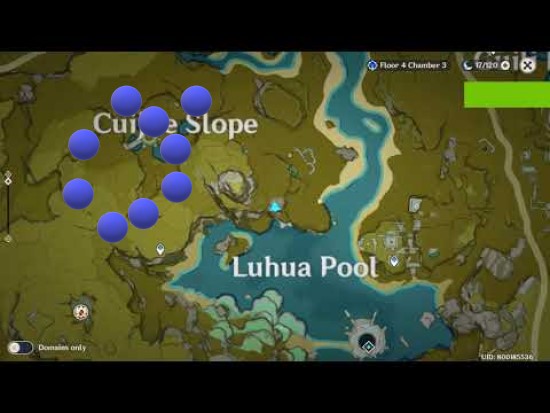 In the image above you can find all the exact locations of the Nine Pillars with which you’ll need to interact with. Only after interacting with all of these will you unlock the door to the ruins. But before that, how do you actually interact with these pillars?

How to Complete the Nine Pillars of Peace in Genshin Impact?

Although, it isn’t the topmost glowing part of the pillar that you have to interact with but the area below it. This will let you insert the Stones of Remembrance that you get for completing the quest.

Apart from this, you’ll get rewards including Weapon Enhancement Ores, Mora, EXP, and much more from Exquisite Chests placed at each of these nine pillars. Just make sure that you don’t deal with most enemies around the pillars to complete the mission faster.

Once you’re inside the ruins you’ll face the Guard with the Chaos Core inside him. Once you defeat him, there will be some Geovishaps that you’ll need to deal with. You’ll also encounter a Ruin Hunter after this.

And after you finish the above task you’ll get access to the treasures of the ruins. There will also be Pyro Infusion stones that will help your enemies amidst the battle.

Do make sure to get the Dull Ring, Royal Flora (5-star Noblesse Oblige) from these treasure chests. Now, you can finally sell the Dull Ring to either Linlang or Bolai to get some Mora.

Have you checked out the Stellar Reunion Event in Genshin Impact yet?