This article gives you the Latest Updated Pistol Gun of Garena Free Fire M1917 through which you can get an impressive gameplay experience.

Garena often releases periodic updates for Free Fire. This adds new content and features. It enhances gameplay. According to the reports, The OB27 update had given positive responses from the players. Therefore, the developers are trying to prepare for the next update. Today We will discuss the Free Fire New Weapon M1917 Pistol Gun i.e M1917 Gun in Free Fire in detail.

When Will It Be Available?

The new update might be available around June 10, 2021. There will be new features which will be available. We can confirm the exclusive arrival of the new gun M1917. We will thoroughly discuss that one.

Free fire often updates about new guns and many more things. The new M1917 gun is already ready and will be available on the Advanced Server for the users. Like Vector, the new M1917 can be used in Akimbo mode.

Free Fire exclusively launched a new weapon named M1917. Let’s get into the stats of the gun.

M1917 is a secondary weapon. The users can use this weapon in akimbo mode. Keep in mind that it will operate better if you use a foregrip. You can’t use magazine, scope, silencer, or Muzzle. A New gun always brings excitement to the players. Let’s see what the users experience from the weapon. 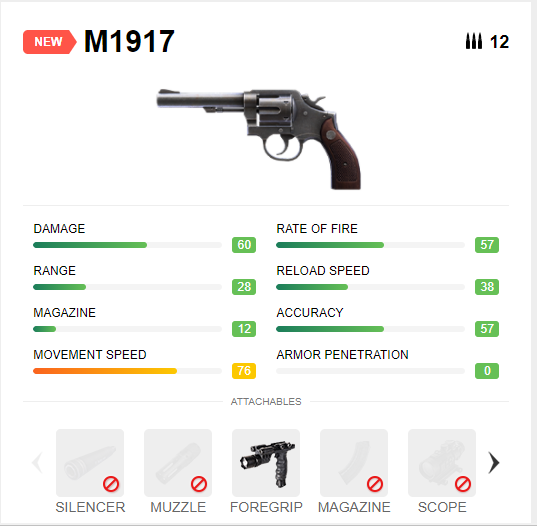 The Guns Skins are a feature that attracts users to play the game. The skins are attached to the guns to look better. The looks of the skinned guns attract the gamers. Sometimes it also enhances the gameplay. The gameplay looks far better and draws attraction to the game. Let me show you some images of the M1917 Pistol Gun. The new gun skins are yet to be available in the game. We will update you with the latest one ASAP.

The recent updates brought smiles to the users. Will it bring a smile to the games? We will find that out in the coming days.