Batman x Fortnite Zero Point Comic Book has released a new teaser. Moreover, the teaser consists of Toona Trouble, Bendy, and Ink Machine. The last version of this comic proved as a great hit. It provided the players with redeem codes to get Harley Quin Skin. Similarly, players seem excited about the new comic update as well.

Batman x Fortnite Zero Point Comic Book has released a new teaser. Moreover, the teaser consists of Toona Trouble, Bendy, and Ink Machine. Fortnite has posted an art picture of Meowscles skin. Whereas leakers are assuming Bendy and Ink Machine may be a part of the new comic version of Fortnite x Batman Zero Point.

The last version of this comic proved as a great hit. It provided the players with redeem codes to get Harley Quin Skin. Similarly, players seem excited about the new comic update as well. 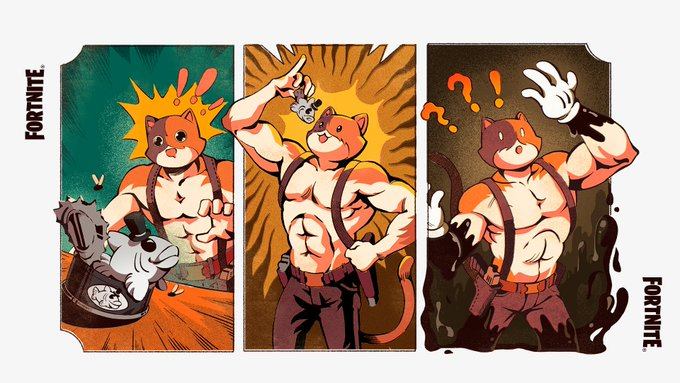 The new book may rotate around the Toona Trouble Meowscles character. The whole story may revolve around Meowscles. According to the leakers, later it may also come as a skin in the game.

In the tweet by Fortnite, there are different pictures of Meowscles. In the first picture, he tries to grab a fish from the box. In the second scene, he tries to eat it. But in the later picture fish disappears somewhere from his hand. In addition to this, some sort of ink also starts wrapping his body.

The character Meowscles comes from the Battle Pass Loading Screen. It was a multiplayer platform game. The protagonist of this game matches with the Meowscles. That is why leakers are linking it with the Bendy and Ink machine.

Fortnite’s tweet regarding all of these leaks reads as:

“It looks like curiosity sure got the best of this cat. What kind of trouble is our pal Meowscles getting into now? To be continued…”

After the release of the teaser, leakers were fast enough to link it with Bendy and Ink Machine. Apart from this, in the third scene of the post Meowscles gets covered with Ink.

This hints that Bendy and Ink Machine will be there in the new version of the comic book. It will be interesting to know whether the new comic version consists of codes to provide cosmetics to players or not.

Also Read: How to Download PUBG KR on iOS With Safest Option?