Day 10, match one, was dominated by Delhi Dragons against Punjab Pinnacles, and match two had throned by Hydrabad nawabs defeating Chennai Clutchers in action-packed AMD Ryzen Skyesports League. This article will showcase the complete details of Day 10

Day 10, match one, was dominated by Delhi Dragons against Punjab Pinnacles, and match two had throned by Hydrabad nawabs defeating Chennai Clutchers in action-packed AMD Ryzen Skyesports League. This article will showcase the complete details of Day 10.

The AMD Ryzen Skyesports League, powered by WD Black, is one of the most applause Valorant tournaments across the region. This League features immense competition and also pure entertainment at the same time.

Day 10 of the AMD Ryzen Skyesports League had concluded yesterday, and it featured some action-packed moves and frags.

Here are the details of Day 10 of Skyesports League 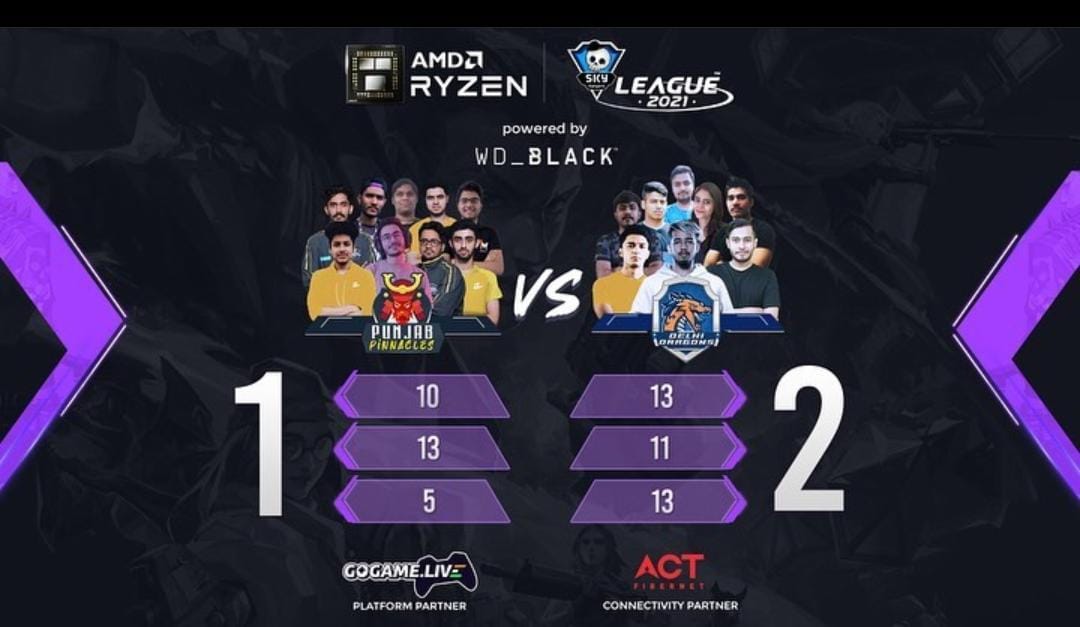 In the first match, Team Delhi Dragons reigned the battleground by following complete teamwork and strategies. Consequently, Delhi Dragons defeated Punjab Pinnacles with a score of 2-1 and regained the second position on the points table.

Further, Hyderabad Nawabs dominated the combat zone in the second match, concluding exceptional teamwork and aggression. As a result, Hyderabad Nawabs defeated Chennai Clutchers with a score of 2-1, securing the third position on the points table.

Points table of the Skyesports League

Top 5 players of the Skyesports League powered by WD Black.

SMX from team Delhi Dragons tops the leaderboard with 207 kills, 193 deaths, and 86 assists.

Hikka from team Delhi Dragons follows the leaderboard with 192 kills, 191 deaths, and 57 assists at second position.

SK Rossi from Bengaluru Crushers places at the third position with 190 kills, 131 deaths, and 31 assists.

Badman from team Delhi Dragons follows the leaderboard at fourth position with 179 kills, 176 deaths, and 44 assists.

MWI from team Rajasthan Strikers places at the fifth position with 175 kills,95 deaths, and 27 assists.